The village of Ait Fares in the Ounila Valley

The journey to the desert

Some of the places you will see

It's a spectacular trip—the drive is a reason in itself for visiting the desert. It's an eclectic mix of mountain passes, lush valleys, Berber villages clinging to the mountain side, dilapidated kasbahs, palm groves and awe inspiring rock formations. It is simply an exciting voyage, away from the frenetic activity of Marrakech to the calm and open vistas of the desert. 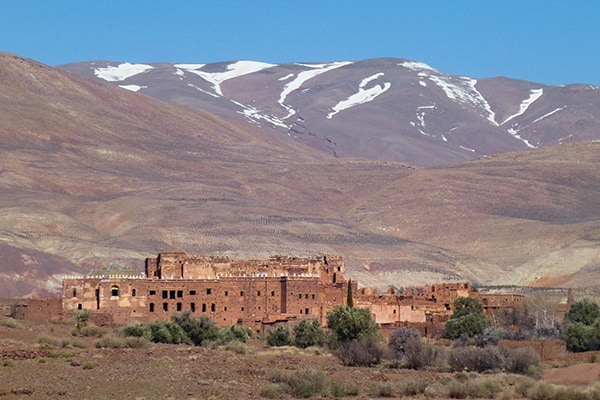 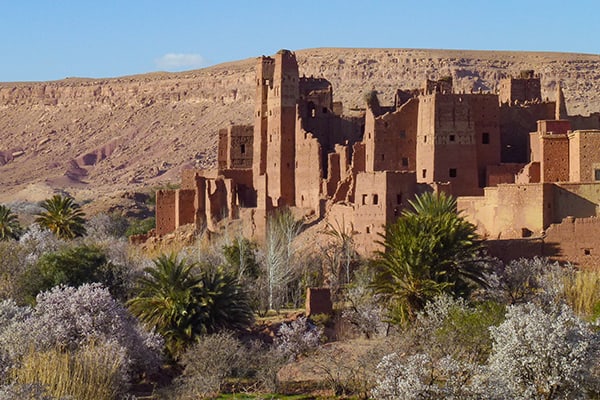 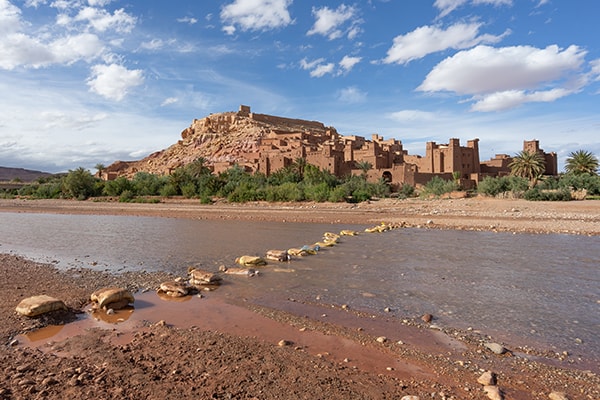 The trip to the desert is quite long, about 9 hours, but it should not be rushed. There's a timelesness about the desert, and the trip should not be governed by the need to arrive anywhere at a specific time. For sure, one wants to arrive at the camp near sunset, but you don't want to hurry either.

Ideally, the preferred itinerary, provided you have time, is to spend one night at a guesthouse en route to the desert, three nights in the desert and then return to Marrakech in one trip via Foum Zguid (this being a circular route). However, if you don't have so much time available, you can either drive direct to the desert, or reduce the length of stay at the camp to two nights.

So, if you are going directly to the camp from Marrakech, we suggest you depart as early as possible. 07:00 is a good time, but you can depart at 06:00 if you prefer a really early start. If staying en route, a departure sometime after breakfast is fine.

There is no specific itinerary, because everyone has different interests and wants to do things at a different pace. But a rough itinerary with interesting places to visit is as follows (I am not going to explain too much about the scenery because half the excitement is the unknown):

Marrakech to Ouarzazate (and Kasbah Ellouze is en route) – 4 hours

Depart Marrakech. After about 45 minutes one starts climbing, and after a further 90 minutes you reach the top of the Tizi n'Tichka pass (elevation 2260 metres / 7,415 feet). However, it can take longer because there are limitless photo opportunities.

If staying at a guesthouse en route you have time to turn off the main road and take the spectacular route via Telouet and the Ksar of Aït Benhaddou before re-joining the road about 2 hours later. This is the Ounila Valley, which is full of dramatic vistas. 40 minutes after the turn off is Telouet, a superb crumbling Kasbah, built by the powerful Glaoui family in the late 19th century. Although never completed, it is full of ornate Moorish architecture and zellige work. It's not touristy at all—you will probably have it to yourself.

A further 60 minutes is the Ksar of Aït Benhaddou (this is 15 minutes from the main road). This is the most visited Kasbah in Morocco, a UNESCO heritage site and well preserved thanks to funding received from the production of films including Lawrence of Arabia, Gladiator and Game of Thrones. Eight families live in the Kasbah. It is a great place to visit, but personally I prefer the lesser known, more dilapidated kasbahs, which feel more dramatic and inspire the imagination.

If going direct to the desert, one should stop at either Aït Benhaddou or Tamegroute (see below).

After about 4 hours one reaches Ouarzazate. The name conjures up exciting notions, but it is merely a rather uninspiring administrative centre. The town houses various film studios, of which Atlas is probably the most interesting. If you are into films the props are interesting. If not, move on.

Kasbah Ellouze is about 30 minutes before Ouarzazate in the hamlet of Tamdakht.

Ouarzazate to Agdz (and the guesthouse of Kasbah Azul) – 70 minutes

The scenery from Ouarzazate to Agdz (one-hour drive) is full of dramatic rock formations. The film Babel was shot here, although I can never work out exactly where. Five kilometres after Agdz is Tamnougalt. This is a superb kasbah, being the original capital city of the Mezguita region and the home of various local governors. Telouet probably has more ornate architecture, but Tamnougalt is more accessible. There is also a lovely café here with superb views over the palmeraie.

You follow the Draa river from Agdz to Zagora (1½ hours). There are over 3 million date palms in the Draa, and 18 different varieties of dates. The people that live there are a mixture of Berbers and Arabs. There were also many Jews, the kasbahs all having a mellah (Jewish quarter). The Draa, at 1,100 km in length, is the longest river in Morocco, rising in the High Atlas and following a route to the Atlantic. Following the construction of a dam near Ouarzazate it now flows until Zagora, although after snow melts and rains it can flow into the desert.

After Zagora, it slowly gets more arid. After 15 minutes you reach Tamegroute, home of a zaouia (Islamic religious school) and Koranic library which you can visit. The religious brotherhood also set up with the help of craftsmen from Fez a pottery, famous for its green glaze. You can watch them make the pottery at the kilns (where it is mercilessly hot) and also purchase all sorts of plates and tableware at the adjacent shop.

The tar road ends in M'Hamid. It really feels like the end of the world. M'Hamid has a lovely palmeraie, which somehow survives thanks to an elaborate system of channels which captures all available water.

And then its off-road to the camp—you've arrived in the desert! 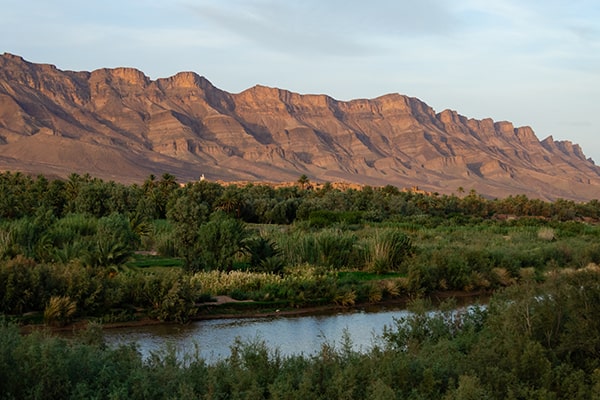 Only 52 days to Timbuktu! 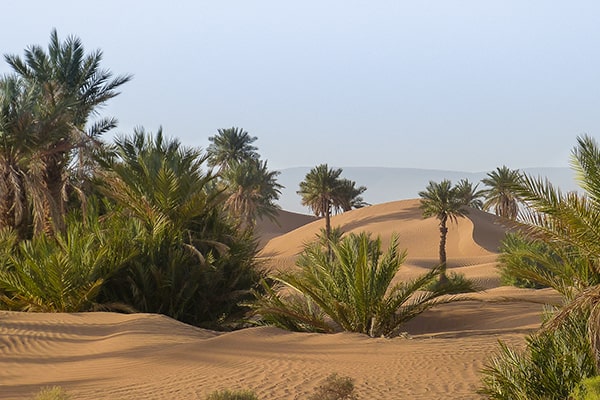 The return trip is normally via Foum Zguid. It takes about 2 hours less, and is about 150 km shorter in distance. The route is more direct and quite different in character. There are less places to stop and sightsee, but the scenery is as equally dramatic.

The camp to Foum Zguid takes just less than 3 hours. It's a fascinating trip through soft sand, dried out lakes and hamada (rocks). You feel (and you are) in the middle of nowhere. The rock formations, especially if the light is right, are a photographer's dream. You will also pass fossil fields, but try and not remove them all… The Chigaga Café in Foum Zguid serves the best French fries in Morocco.

From Foum Zguid it is one hour on a mainly traffic free road to Taznakht, the carpet making centre of the area. The scenery is again awe-inspiring, being a mixture of heavily weathered rocks and palmeraie. Taznakht is a good place to purchase rugs, although you need to bargain hard. Just because you are out in the sticks doesn't mean the prices are necessarily any lower than Marrakech.

From Taznakht, it's one hour to the main road, which you join 40 km north of Ouarzazate. Look out for the petrol station, which looks like something out of a spaghetti western. It's the set for The Hills Have Eyes 2, a monstrously awful production.

And then it's back over the Tizi n'Tichka pass to Marrakech. 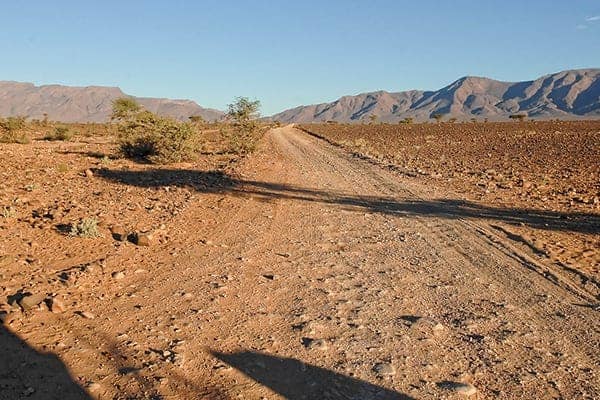 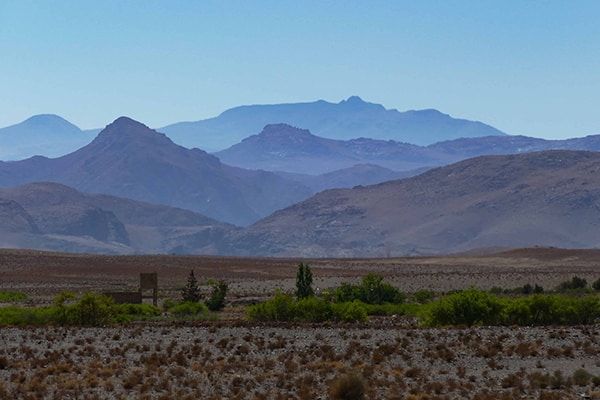 Jbel Siroua as seen from Taznakht 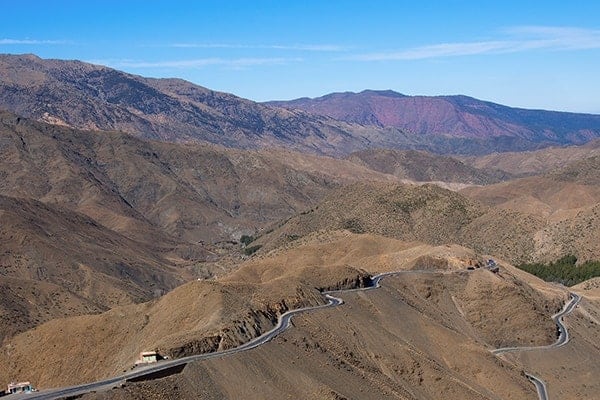