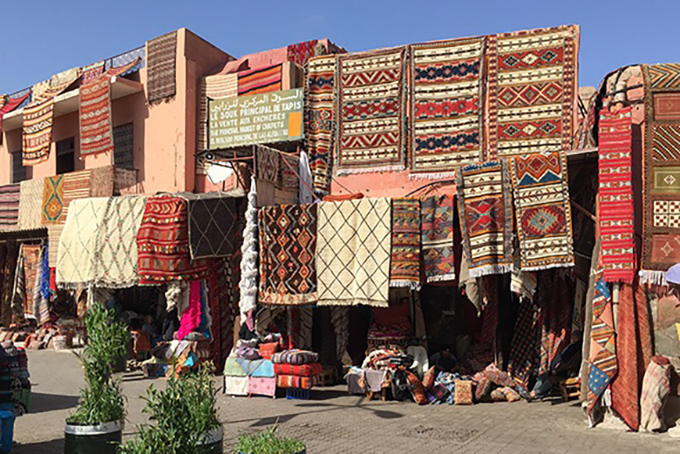 In the first part of this blog I talked about how the process of rug-making started in Morocco among tribal women as a result of the abundance of wool available to them from their sheep-herding communities. Weaving was an activity the women could do whilst the men were out working in the fields so as to provide comfort and warmth for their own homes. They also sometimes made rugs as wedding gifts for members of their families.

The method of weaving vintage rugs

In rural areas of Morocco, the looms used by a Berber tribeswoman would often be very crude and basic, not much more than pieces of wood tied together with string, around which would be wound the cotton or wool used as the warp for the rug. As her weaving space would be limited to a corner of the room, the loom would be fairly small, so the woman would only see the immediate part of the rug she was weaving, approximately 30cm of the rug, before it was gradually rolled around the lower beam and disappear out of sight, so she could start on the next section. She would never look back at her previous work as superstition wouldn’t allow for this. Therefore, she would have to rely on her memory and her own concept of the rug she was making. This is how Berber women developed their creativity – If they could not see the last piece of rug produced and their memory was a bit hazy, they would often just start doing something different and new, maybe introducing new colours or designs. Hence, the variety of patterns, abstract shapes and motifs that can appear in one vintage tribal rug and give it such character. The woman would use her hands and fingers to measure the length and width of the weaving as it was produced. It is no wonder then also that some vintage Berber rugs are a freeform shape, the sides not perfectly parallel as would be the case with rugs produced by more sophisticated methods of weaving, such as Persian carpets. A freeform shape is just one sign of the authenticity of some vintage tribal rugs and is quite a charming feature in itself. 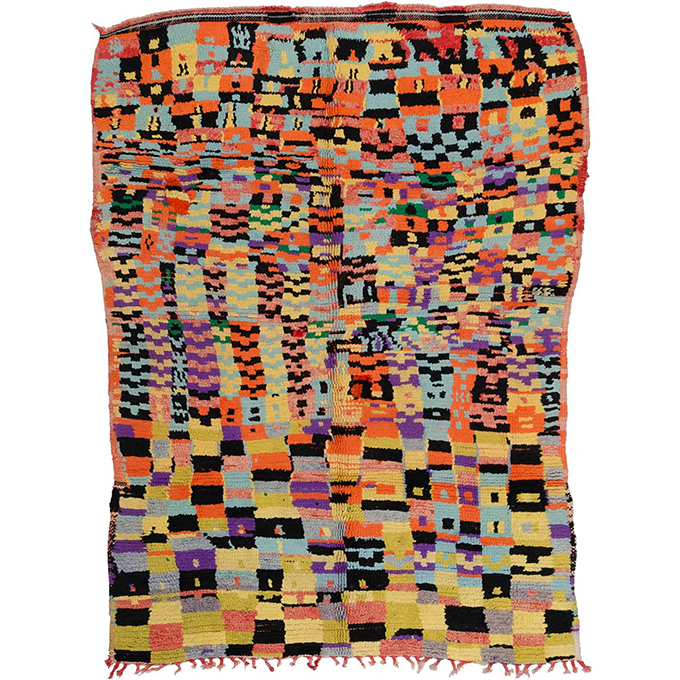 Signs and symbols in vintage rugs

When we talk about signs and symbols woven into a rug, what do we mean? The woman’s inspiration for her rug design would have been partly based on tradition – information handed down by her mother, grandmother, great-grandmother before her, for example, traditional tribal motifs and colours - also any family traditions such as incorporating a teapot into the design or an animal. Other symbols a woman might include in her weavings could relate to her daily life, what she saw around her, her family, life events such as births, marriages, even deaths, symbols of fertility and nature, colours based on her emotions and thoughts. Any of these elements could be depicted in a number of ways, dependent upon and limited only by the artistic creativity of the woman and her imagination. Spontaneity and originality are often, therefore, another characteristic of a vintage rug.

Below is a map covering the main rug producing regions of Morocco, from the book, Berber Carpets of Morocco - The Symbols Origins and Meaning by Bruno Marbatti: 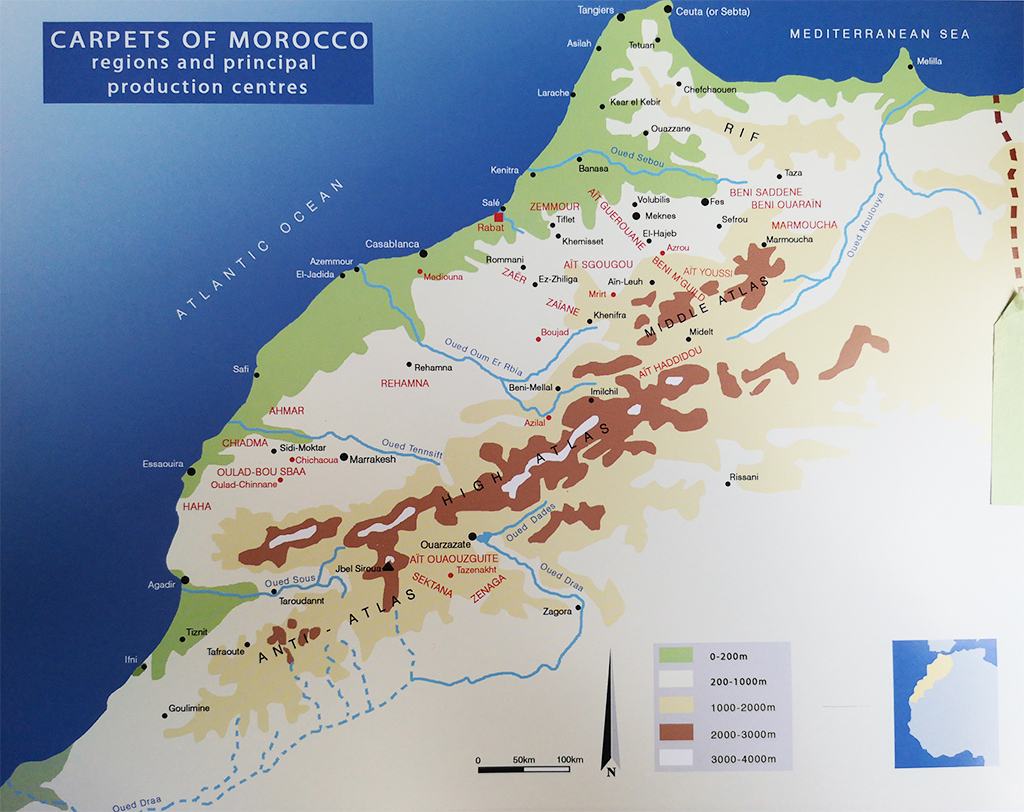 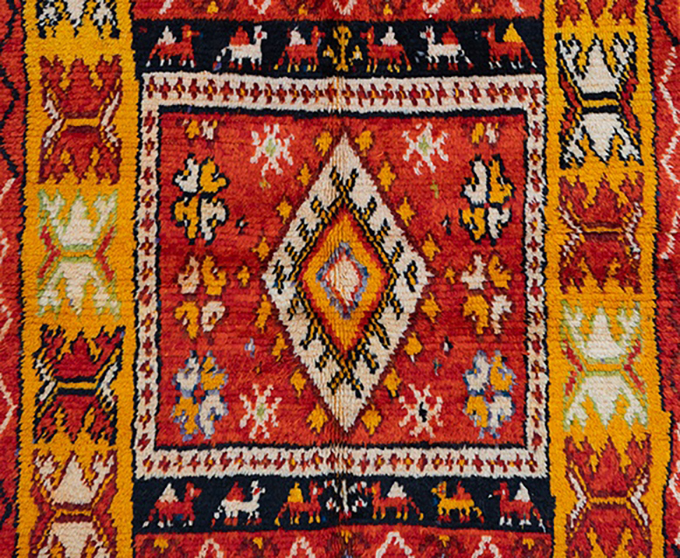 Each tribe, as well as each family within that tribe, would have had a different vision for their rug, although the tribal identity would be paramount. The quality of wool produced by sheep farming would influence this also. For example, the tribes of the Ait Ouaouzguite confederation are renowned for the high-quality silky wool obtained from their sheep and the more traditional patterns that the women weave into their rugs using this wool. The final rugs are full of strong tribal ‘lozenge’ patterns in striking colours, produced in years gone by with the use of natural dyes made from surrounding plants. Nowadays, of course, chemical dyes are also used. The rugs produced often show a lovely sheen across the surface of the rug in a certain light. These rugs are also known as Taznakht rugs, named after the town which is at the centre of this carpet weaving industry. 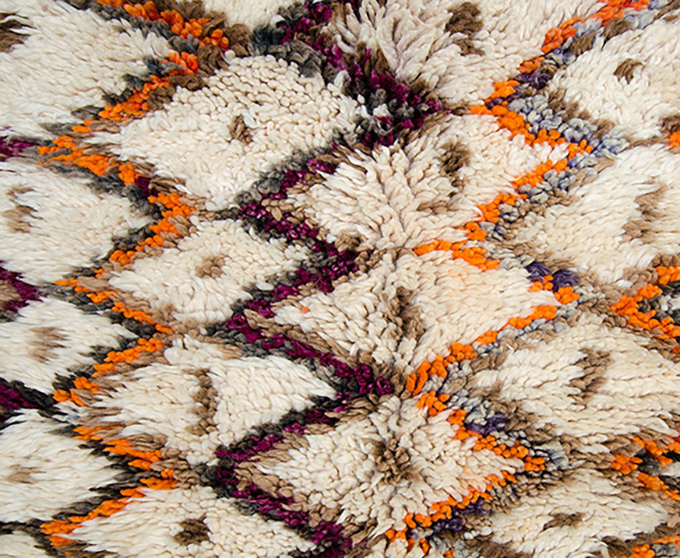 The Ait Bou Ichaouen tribe, in contrast, are a nomadic tribe, whose rugs have only been discovered within the last twenty-five years or so due to the tribe’s remote location in north-east Morocco. The rugs they produced often have a very thick pile as warmth would have been a priority for them due to their location on the high plateaus. Their designs were based on the women’s lifestyle and what they saw around them as there was little interaction with other tribes; for example, mountains, tents, animals, teapots - even chicken’s footprints have been represented in some rugs from this tribe! 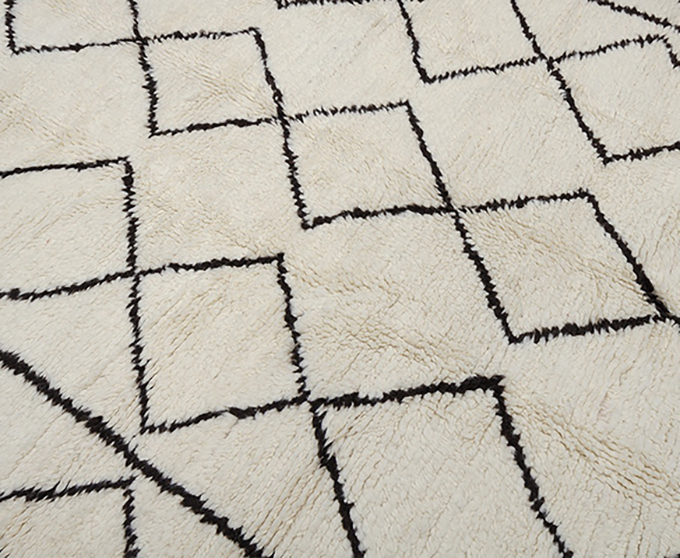 The Beni Ouarain tribe have produced (and continue to produce) very easily identifiable rugs that are now quite commonly seen in Europe and further afield. These are usually a natural ivory colour with a medium to thick pile, and have a distinctive simple diamond pattern all the way along the rug. It is often difficult to identify a Beni Ouarain rug as being genuinely vintage rather than newly made. 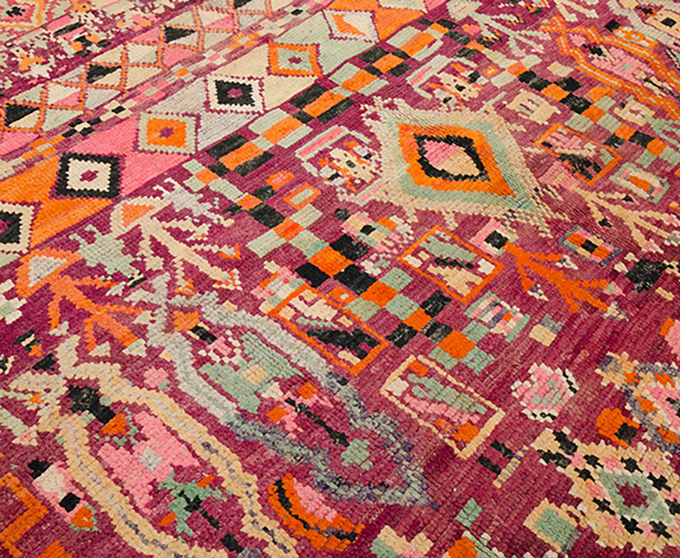 Vintage rugs from the region of Boujad, situated on the Haouz plain, are very different to these more traditional type rugs. There are still many traditional Boujad rugs for sale which are a deep pink in colour and bear traditional tribal symbols, but a second type of rug was also produced which, instead of regular tribal patterns such as the lozenge, tend to be more informal and creative. They may be loosely based on traditional checkerboard or square patterns – but the variance in size, colour and often exuberant patterns incorporated into these rugs makes them so totally different from regular creations. These vintage items are very much works of art, each one strikingly different from the next.

I have mentioned above just a few of the main rug-producing tribes and tribal regions in Morocco, pointing out differences in style and design. Of course, there are many more to talk about, but we’d be here all day. Suffice to say, vintage Moroccan rugs are fascinating works of art, each one created to be unique and therefore highly desirable and collectible.

Where can I buy a vintage rug?

If you are on holiday in Morocco, there are many places you can buy rugs – primarily in the souks of any of the major cities such as Marrakech, Fes or Essaouira, or in the mountains there are weekly village souks where you may find rugs being sold. However, buyer beware, ‘vintage’ is often a word used to describe a style in Morocco – a rug that is not new or has been left out in the hot North African sun to ‘age’ it may be described as vintage. It may not be that genuine treasure you are looking for. If you want to buy a rug whilst in Morocco, make sure you go to a reputable company and do your homework first so you know how to recognise a genuine vintage rug. Hopefully, I’ve given you a few tips on what to look out for in this blog.

But what if you feel it’s all a bit daunting or you don’t have the luggage allowance to bring back home that amazing rug you fell in love with? Well, I might be able to help you here…

For the past seven years, my husband and I have lived in Morocco for several months each year and have worked very closely with Nick, the owner of this desert camp - building the website for Erg Chigaga Luxury Desert Camp, carrying out his social media and writing blogs for his website about this amazing country. During this time we have travelled extensively around the country and developed a keen interest in and passion for both vintage Moroccan rugs and vintage Berber jewellery. We just love the creativity, spontaneity and sheer skill involved in making these fabulous rugs by hand and have enjoyed many hours of researching their history. (The Berber jewellery and adornment is just amazing too!)

In January 2018 we launched The Rug Souk, a UK-based company, endeavouring to provide genuine Moroccan vintage rugs at affordable prices. If you are interested in buying a unique vintage Moroccan rug, please browse our website and contact us if you would like to purchase one of our beauties and add some tribal chic to your home. Thanks for reading.

(This article is sponsored by The Rug Souk)