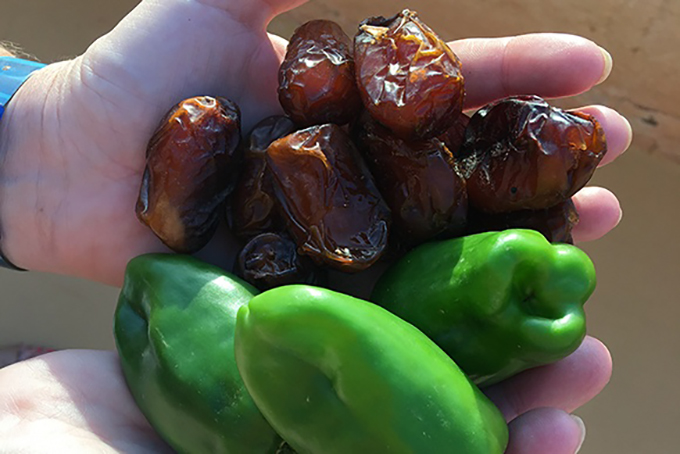 Having already taken into account the two main staple foods of Morocco, namely tagine and couscous, with all their variations in recipe, we move on to the lesser known foods eaten locally. Cuisine in North Africa is very varied - although one would be led to believe by recipe books and magazines that tagine and couscous are the only things eaten by Moroccan people. Let’s explode a few myths.

Have you heard of bissara? This is a delicious and proteinous breakfast food made with dried and puréed fava beans (broad beans), and topped with olive oil and spices, typically cumin and red pepper. It is often eaten during the colder winter months as a warming start to the day or as ‘second breakfast’ as it is often labelled. Fava beans are relatively easy and cheap to grow, so this dish is a favourite amongst those people who have very little in the way of material goods - but who often have a generous heart to share their food with others! 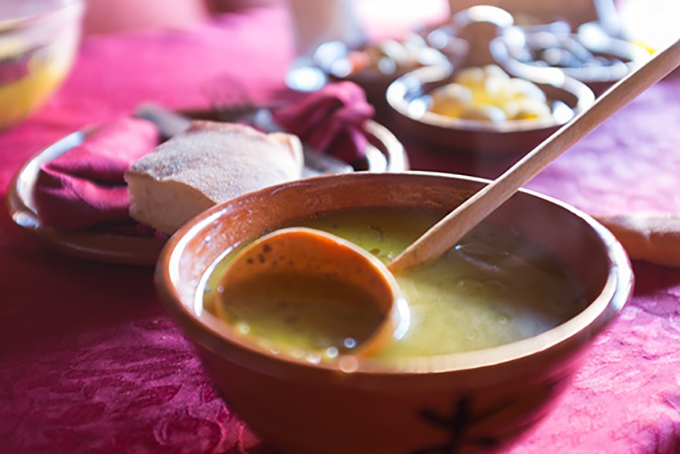 We can’t continue without talking about harira, a thick warming soup made with lentils, chickpeas, onions, tomatoes and a variety of African spices. Traditionally, it is eaten during Ramadan to break the fast, often alongside sweet pastries known as chebakia. These are rose-shaped layers of dough, deep-fried until golden and dipped in a thick gooey honey and rosewater syrup, then coated with sesame seeds. Again, we see the mélange of sweet and savoury working naturally alongside each other so beautifully in North African cuisine. Sometimes, harira soup is served alone as a very tasty starter course in a restaurant or family home. 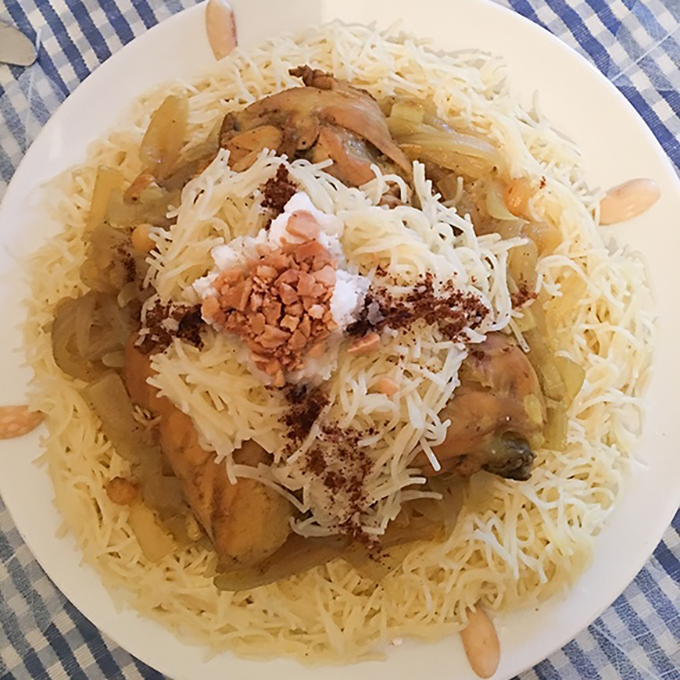 If you travel to the south of Morocco, one of the dishes you may be served in your village guesthouse is seffa medfouna - a beautiful looking dish with a taste to die for (in my humble opinion). A mound of broken vermicelli adorned with raisins, fried ground almonds, cinnamon and saffron, then topped with icing sugar, is often presented on a platter for the guest’s appreciation. To cook, the vermicelli is coated in oil and steamed in a couscoussier (traditional steamer usually used for couscous) several times until it is plumped up sufficiently to be tender. Water and the other ingredients are added during the process, then finally the dish is topped with caramelised raisins, a sprinkling of almonds and that all-important sweet layer of icing sugar. The word ‘medfouna’ means ‘buried’ and so underneath the mound will be found pieces of chicken, beef or lamb, often previously marinated in delicious spices. A truly mouth-watering dish. 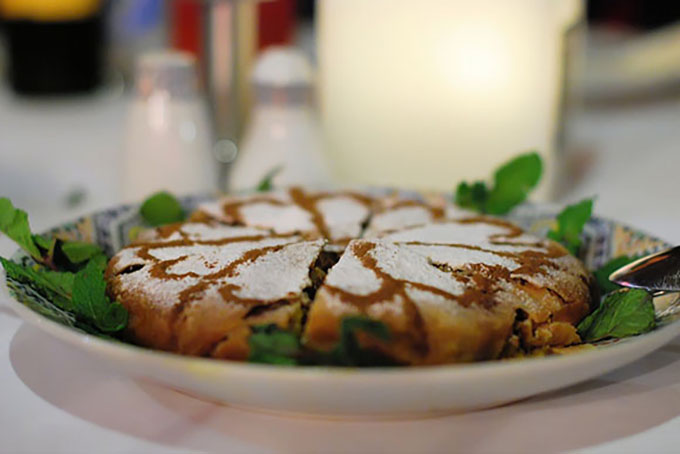 Another of my favourite foods is pastilla, a dish you are likely to find on restaurant menus and in Moroccan homes alike. Traditionally, the main ingredient of pastilla was pigeon, so essentially it’s a pigeon pie! However, nowadays, pastilla is most frequently made using chicken. The diced meat is fried with garlic, onion, herbs and spices, then a mix of ground almonds sweetened with orange blossom water and dates are added along with a pre-prepared omelette-like mixture. This finely chopped mixture forms the pie filling. It is wrapped in filo pastry and topped with sifted icing sugar and cinnamon once cooked. Can you see the pattern in most of these dishes? It is the combination of sweet and savoury which is so often to be found in North African cuisine. This dish is often served at weddings or other celebrations as one of the many courses. I can see why! 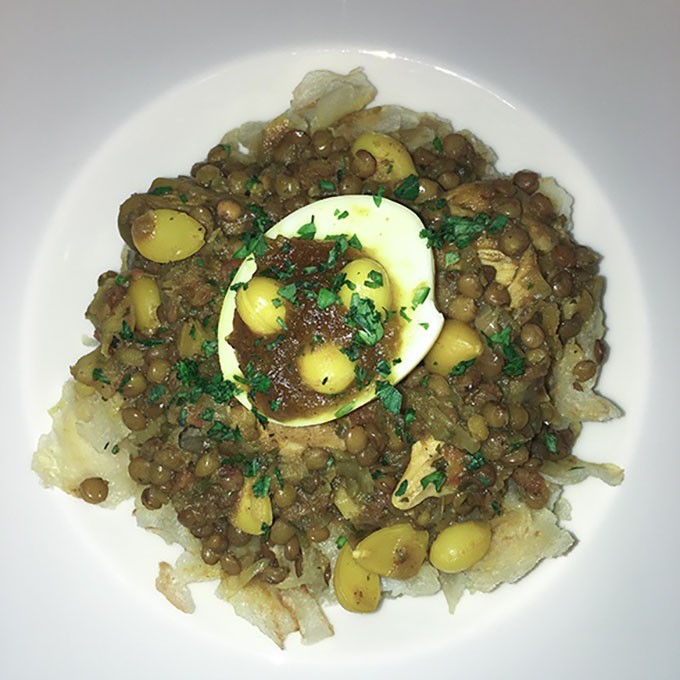 Rfissa is a traditional Moroccan dish often served to women after having a baby to give strength and nourishment. It consists of a chicken, lentil and onion stew poured on top of a base layer of fried (or steamed) and shredded crêpe-like pastry called trid. The stew is delicately spiced using ras-el-hanout (the ‘head of the shop’ spices we talked about in Part 1 of this blog) as well as fenugreek seeds. Often, it is accompanied with a side-serving of broth. Like many Moroccan dishes, rfissa is traditionally eaten communally from the same dish by a group of people, either using hands or with a spoon. 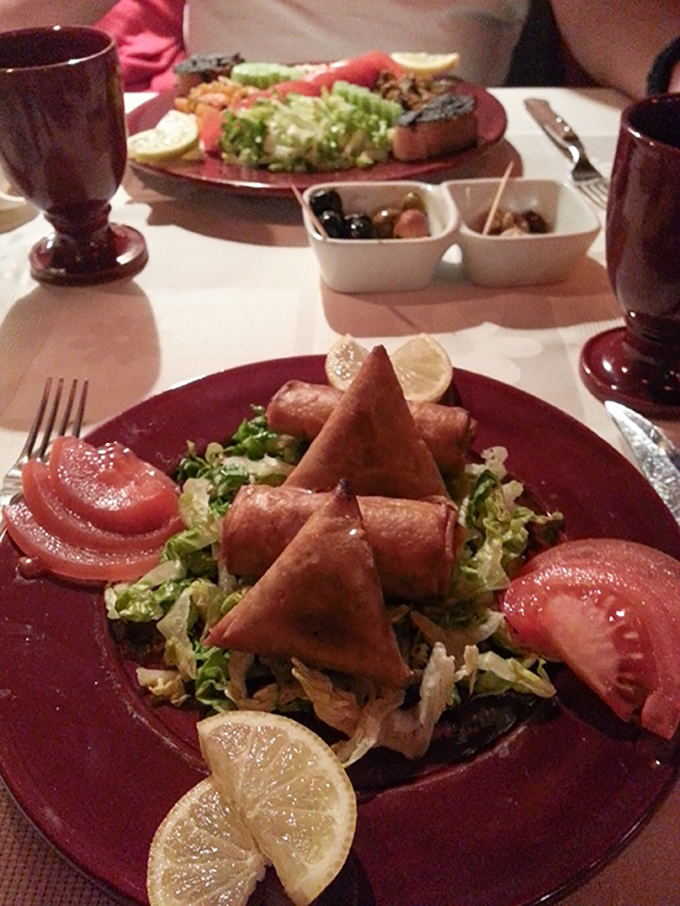 Finally, I must give a nod to briouat, delicious deep-fried triangles of yumminess! Filo pastry is filled either with a sweet or savoury mixture and deep-fried until golden and crispy. Popular fillings include cheese, tuna or chicken with ginger and saffron for savoury briouat or ground almonds or walnuts mixed with sugar, butter, cinnamon and blossom water for sweet ones. They can be served either as an appetiser or as a sweet course, dependent upon the filling. One thing’s for sure, they are very more-ish!

I could continue on and on…there are many such delicious dishes handed down from generation to generation in Morocco. Why not take a trip to Morocco and discover these amazing foods for yourself? The only problem is that one trip will never be enough…