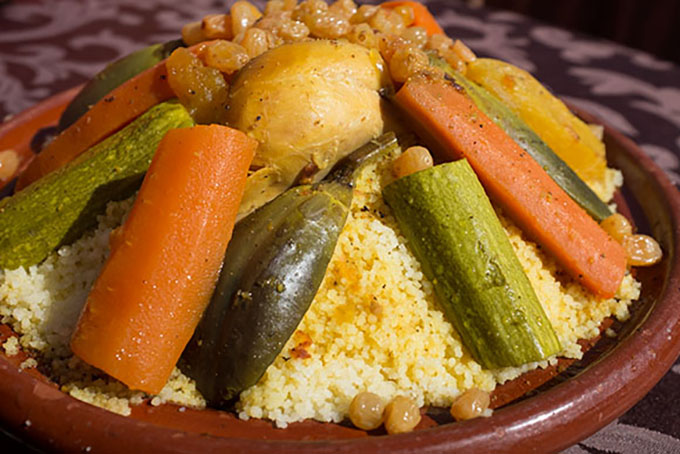 Often cited as being the gateway between Africa and Europe, Morocco has garnered an excellent reputation for its cuisine, and blending its traditional Moroccan cooking with that of its European counterparts has only served to enhance that reputation. Traditional Moroccan cuisine is a true feast for the senses - the vibrant colours of the spices used, the wafting aromas produced as the food is cooked, the serious sizzling of tagines as they adorn the charcoal, the hand-rolling of the couscous into balls to make it easier to eat and then the ultimate - that mouth-watering taste of sweet, sour, crunchy, soft yumminess. Moroccan cuisine really does have it all. 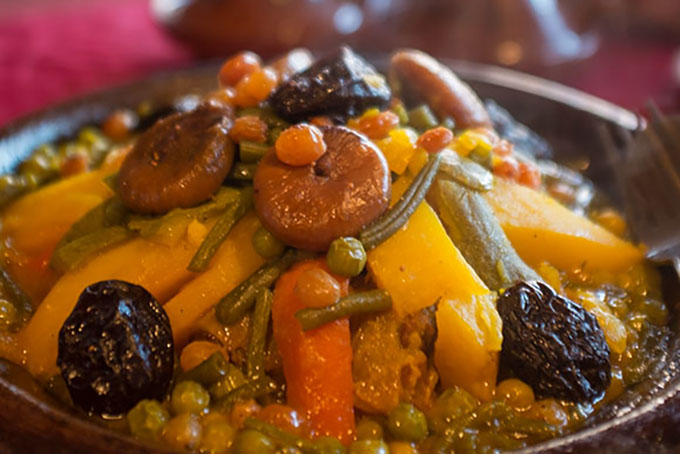 The basis for many North African meals is the national dish, couscous. This mixture of grains has high nutritional content, preserves well and is inexpensive yet very filling, so it is easy to understand why it forms the basis for many dishes of the Maghreb, whether a family everyday meal or a sumptuous banquet. Traditionally, Friday is ‘couscous day’ and practically every woman in Morocco will serve couscous accompanied by meat or fish with vegetables - and of course spices - to her family and friends, usually presented in a huge serving bowl from which each person will take handfuls of the grain and roll it into a ball before consuming, thus making it less messy to eat! A side bowl of hot sauce often accompanies the dish to add moisture. The woman will take hours over the preparation of this dish as she must work hard initially to separate and treat the grains, then sieve these with sieves of differing diameters in order to achieve a batch of similar size granules that will cook evenly. Then she adds water and begins the process of rolling and shaping them … and finally she cooks the couscous and the accompanying legumes and meat or fish. It is no mean feat.

Couscous (main picture) can be served together with a tagine, the other main staple diet of Morocco. The term tagine actually applies to the conical shaped pot in which this dish is cooked and from which it is served. A traditional tagine pot is made entirely of clay which is glazed to give it the appearance of terracotta. It is designed to be used over a charcoal heat source or very low gas, so it can cook the food contained within over several hours, similar to a modern day slow cooker. The food is placed in the flat bottom part of the tagine and layered according to cooking times needed, then as the dish is heated on a low flame or charcoal the heat builds up in the domed or conical lid of the pot, cooking the food from the bottom to the top. The finished dish retains the earthy flavour of the pot itself, adding to the delicious taste of the food. Frequently cooked tagine dishes include lemon chicken with olives, beef with prunes, lamb with figs and walnuts, as well as Kefta Mkaouara, a spicy meatball and egg tagine. As you might have noticed, a common theme to the tagine menu is the mélange of meat with fruit, sweet with savoury, a juxtaposition of tastes. Moroccans don’t believe in subtlety, rather the dish is served to seduce the person eating with its exquisite flavours and textures. Most people would agree that it achieves its aim! 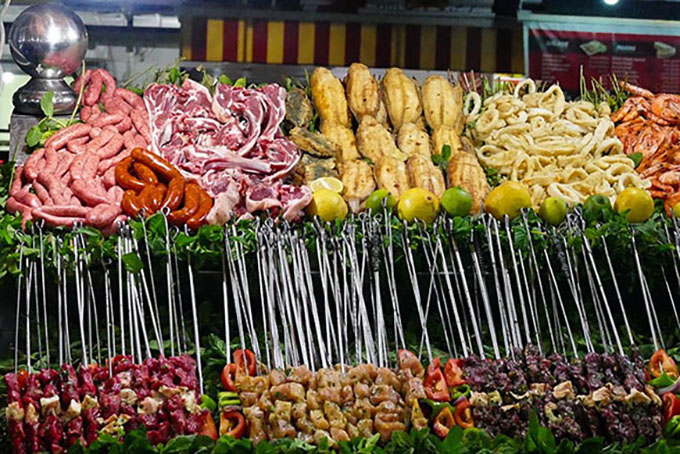 If tagine or couscous do not appeal to your taste buds, the most common alternative dish chosen from Moroccan menus is that of brochettes. Chicken, turkey, lamb or beef is cubed and placed onto metal skewers and spiced with a blend of cumin, garlic, paprika and salt before being cooked on a medium-hot grill. Sometimes, instead of using individual spices, a mix of spices can be bought from most of the small shops or hanout in the medina, called ras el hanout, literally meaning ‘the head of the shop’. This is a mix of spices assembled by the owner of the shop to create his own special blend. There can be as many as 27 spices added to the mix according to the shop owner’s preferred taste. The skewered meat is either marinated or rubbed thoroughly with the spices to ensure strong flavours in every mouthful.

The Moroccan dishes described above are just a few of the more common delights to be found in Moroccan eateries and on the street. In Part 2 of this blog, I will talk about the dishes that are not so well known - the foods that tickle the taste buds of local people and are enjoyed by those in the know!