Tamegroute – Is it worth a visit?

Our route to M’Hamid el Ghizlane, the doorway to the desert, takes us from Marrakech up over the Tizi n’Tichka mountain pass and down the other side, passing by various villages perched on the neighbouring hillsides. Looking out of the car window, it amazes me how these sandy coloured villages manage to cling on to their respective slopes and don’t slide deep into the valleys below – but still they remain, seemingly defying the laws of gravity.

But the sleepy village of Tamegroute is different. It is not perched on a hillside, it just lies right next to the road, not far from the town of Zagora. No-one would guess from appearances that this is the home of what was once one of the most important Koranic libraries in North Africa, holding a collection of 50,000 Arabic works. Most of these manuscripts and books have now been distributed to museums across Africa or have been lost, but there remains in the library a very impressive collection of approximately 4,000 priceless manuscripts. And what’s more, it is open for public viewing at certain times of day. 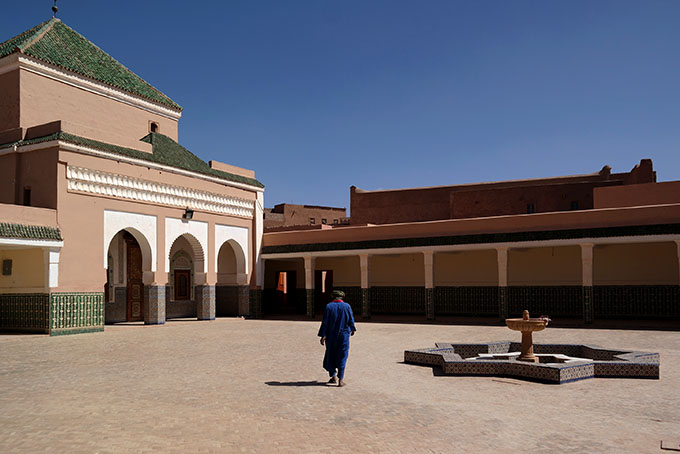 Historically, Tamegroute’s reputation as a place of education and religious importance dates back to the 11th Century, but it was only with the founding of a branch of the Naciri Brotherhood, an influential Sufi movement, in the 17th Century, that the belief spread that the Qur’an must be studied intently in order to understand Islam in its entirety. Hence the development of this prestigious library by Sidi Mohammed bin Nasir and his son, Ahmad, the latter continuing his father’s work after his demise by collecting further manuscripts on his travels throughout Arabia, Egypt and Iraq and other Arab countries of the world. In this small unassuming village, this library located within a zaouia (Islamic religious complex), housed books on such diverse topics as astrology, mathematics, medicine, religion, dictionaries, poetry – and of course many copies of the Qur’an. 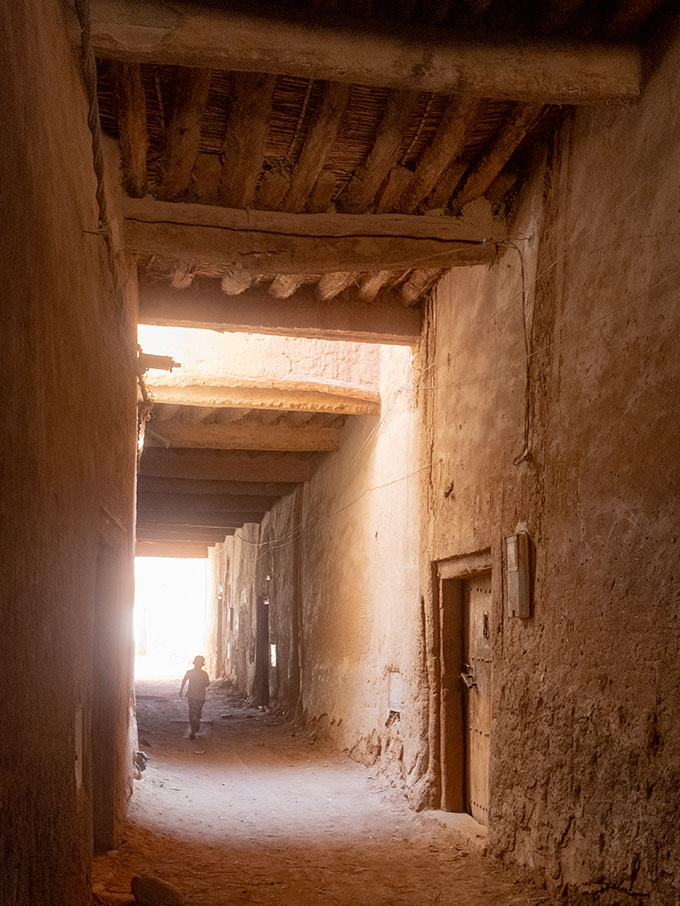 The underground ksar in Tamegroute

As we park the car, we are met by a guide. He knows exactly what we want to see and leads us through the narrow alleyways of the village until we reach this Tamegroute treasure. It is a bit dark inside, but this just adds to the growing sense of excitement. An elderly gentleman appears as if from nowhere; he is sitting in a wheelchair and is being pushed by a young man, who, it transpires, is his son. Hajj Halifa el Fassi, this 89-year-old gentleman who is the custodian of the library, greets us in several languages, then points out various ancient manuscripts in glass bookcases and cabinets stationed around the edges of the room. Apparently, this elderly gentleman is a direct descendant of bin Nasir himself. We are fascinated as he points out a book on astrology here, an illustrated dictionary of animals there, a beautiful leather-bound copy of the Quran in this cabinet and books listing medicinal plants in fine calligraphy on this bookshelf. An ancient map of Alexandria takes centre stage of one cabinet, a magnificent Qur’an from the 11th Century etched onto gazelle hide takes pride of place in another. We are astounded at this wealth of knowledge gathered here in a small room in a backstreet of such a small sleepy place. Sadly, photography is not permitted, so we leave with our minds full of the amazing manuscripts we have just encountered, hoping we will never forget this wonderful discovery. 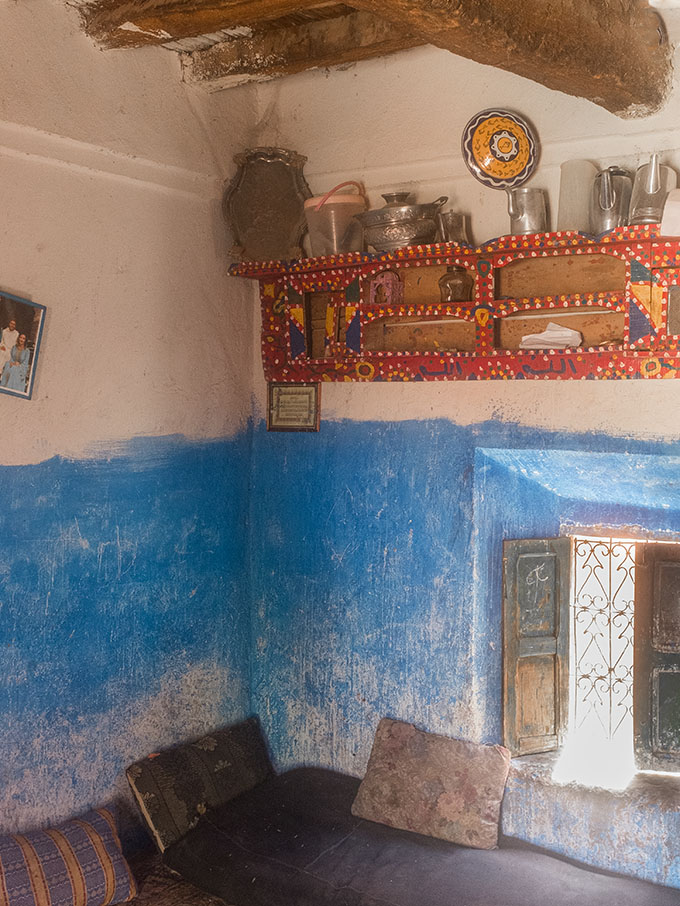 Home in the ksar

Our guide leads us through the underground passages of the ksar (fortified village) and takes us to his house where we are seated and served with copious amounts of the ubiquitous refreshing mint tea. Then it’s time to view the production of the other main interest of this small village, the stunningly different green pottery displayed in practically every shop that lines the main street.

This handmade pottery is the handiwork of several families who live in the village. Each family has their own small atelier or workshop where they have dug out a waist-high pit in which they sit to mould a pot, a bowl or cup from the clay mixture they have created on their own small homemade potter’s wheel. This can take a long time to get the clay to just the right consistency and shape. After drying out outside in the hot North African sun, the items are glazed before being baked at high temperatures in one of several outdoor hand-built ovens. What is special about Tamegroute pottery is the distinctive green hue that is produced by combining manganese, silicon and copper together in a certain ratio and then using it to glaze the special clay mixture of the pottery. The clay comes from the riverbed of the Draa and it is reputedly the best type of clay for manufacturing goods. As the glaze coats the items a reaction takes place to start the colouring process – but the full traditional green colour is only realised in the baking of the pottery in the exceedingly hot furnaces. We are amazed to see very young boys working with their fathers to place the pottery into the ovens and to set it out after it has baked in rows on the ground. Thereafter it is taken to the local co-operative – which inevitably is our last stop.

Laden down with the simple but distinctive green pottery we cannot resist purchasing at the co-operative, we find our car and set off on the final leg of our journey towards Erg Chigaga.

Had we not stopped off in this small village, we would have been none the wiser of Tamegroute’s legacy. But I’m glad we did. I feel enriched by this experience – I’ve viewed the most incredible ancient manuscripts, met a descendant of the Naciri brotherhood, seen the process of making the famous Tamegroute pottery – and now have several pieces of said pottery adorning my shelves in my home as a memory of another remarkable trip in Morocco. I wouldn’t have missed this for the world.