The Tea ceremony: Atay - One lump or two? 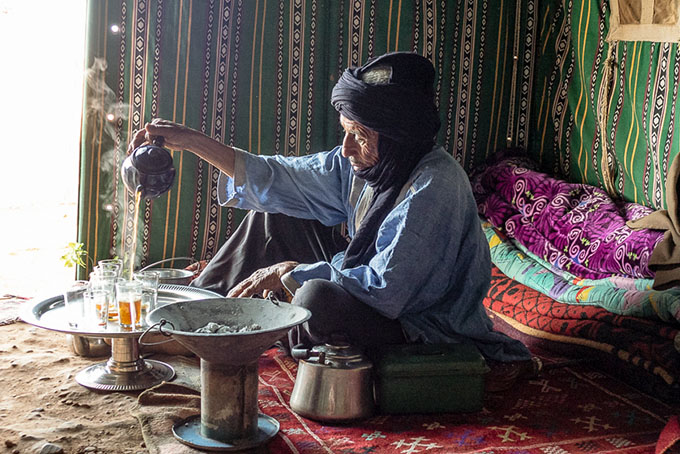 So, we have our tea tray ready; the teapot takes pride of place, accompanied by decorative glasses, one for each person present at the ceremony and two extra to be used in the ritual, sprigs of mint – or, as is more usual, clumps or even handfuls of this fresh-smelling herb, a sugar cone with hammer and a sugar caddy. The kettle is filled with water and placed on the fire or the brazier to boil.

This is the setting for the tea ritual that takes place every day, several times a day, in every Moroccan home, shop and café. However, the variation of the tea ritual I find most fascinating is the one I experienced when visiting Ali, our Nomad friend in the desert.

Ali lives with his wife and children amongst the dunes of the Sahara in a shelter he built for his family; an old patched-up tent forms the ‘living room’ and the ‘bedroom’ comprises a few old sheets roughly sewn together with a structure made of twigs and branches to support them. The heart of his home is the fire he has made with bits and pieces he has found lying around. We are welcomed inside to join him for a glass of tea, desert style. His wife and children are not around, presumably they are collecting wood or have gone for a walk. ‘Marhaba’ (welcome), he says, as we take off our shoes and settle ourselves on old, weary rugs strewn across the floor. People who have nothing are often the most generous, I observe, as the battered kettle is put onto the fire to boil the water within. A pair of old bellows are used to fan the fire into flame just as it seems to be growing tired. Steam fills the tent.

After about 10 minutes, a little of the near-to-boiling water is poured into a glass and swirled around to remove any dust or sand. This is emptied into the next glass and so on until all the glasses have been cleaned and the final glass is emptied of all impurities. A rag is produced to dry the glasses in readiness for Ali’s special guests.

Today, there is no mint to be seen. Ali has collected thistles in order to make thistle tea. There is no brass tray, no fancy ornate glasses, no silver teapot, no sugar caddy, nor hammer. But there is a metal tray on which sit several plain glasses of different sizes along with a brown teapot painted with squiggles and a large sugar cone, off which he breaks huge lumps with his bare hands.

And then the differences between a British cup of tea and a Saharan cup of tea really kick in. The tea is not just added to boiling water, poured into the drinking vessel with a little milk and given a swirl with a teaspoon…et voilà… No, here follows the elaborate ritual involved in making the perfect cuppa for one’s guests, Moroccan desert style!

The teapot is placed onto the edge of the fire to warm it up and a little boiling water is added. A handful of thistles are pushed roughly into the pot. The pot is swilled out after about 1 minute into one of the waiting glasses: it is believed this process releases ‘the spirit’ or essence of the tea and this glass is kept to one side. Then the pot is filled with a little more boiling water and poured into a second glass. This apparently removes any dust or residue from the tea and this murky substance is disposed of. The original glass of liquid is once again added to the pot and further boiling water is added too. The pot is returned to the fire for a few minutes before further handfuls of thistles and huge chunks of sugar from the cone are added and stirred in. The tea is now left aside for several minutes to brew.

It is the duty of the pourer to now ensure the guests have a perfect cup of tea. When he thinks the time has come, Ali pours the tea from a great height into one of the glasses, then tastes it. He pours it back into the pot and serves it again. He does this several times as necessary until his taste buds assure him that the tea is of the correct consistency and he is serving the best tea possible. Once satisfied, Ali passes a glass of the finest sweet substance to each guest in turn, wishing ‘Besseh aw raha’, (good health) as he does so. We are told that tea is poured from a height to ensure that a froth forms on the top of the glass and to cool down the tea as it pours. A little space is left at the top of the hot glass to enable the guest to hold it with his or her fingertips. As is customary, we each place our glass back on the tray after consuming the fine tea and Ali shuffles them into our order of seating, filling them a second and third time. The tea is superb, one of the best I’ve ever tasted…piping hot, sweet and tasty. I might just be tempted to give up my PG Tips for good…