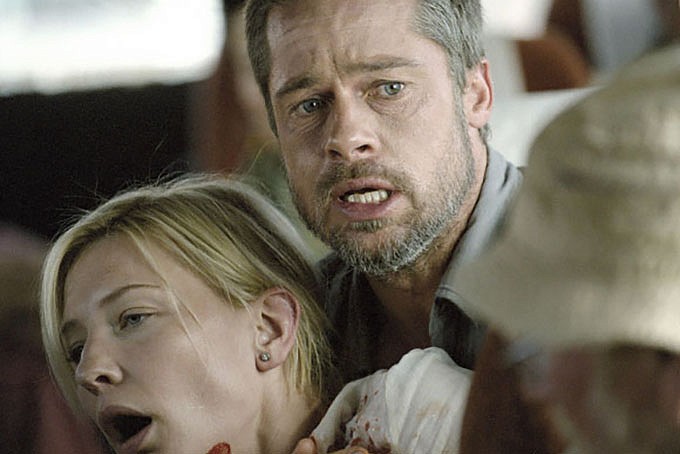 The diverse landscapes of Morocco have for many years been the envy of the global film industry. Mainstream film-making in Morocco started in 1949 with the production of Othello by Orson Welles, followed five years later by the atmospheric little-known film entitled Another Sky (1954) amongst others. Ever since 1962 when it hosted the desert scenes of the influential blockbuster, Lawrence of Arabia, Morocco has served as a backdrop for several hundred films seeking a Middle Eastern ambience, an exotic Mediterranean feel - or even providing the setting for a Tibetan monastery as in the case of Kundun (1997). With its sandy deserts and high dunes, snow-capped peaks and lush valleys, not to mention its Berber mountain villages or its fascinating imperial cities, Morocco has it all.

We begin our trail in the Red City, Marrakech. 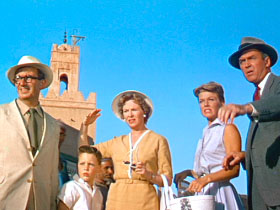 The main square in Marrakech, the Jemaa el Fna, has featured in many film scenes cast by international film directors. With its vibrant array of street entertainers, snake charmers, storytellers, food stalls and musicians, it provides an ideal setting in which characters can meander their way around the square into the souks, mixing with the colourful locals or frequenting one of the many surrounding cafes with views onto the square where one can spy on the action and take surreptitious photographs. Or indeed, the narrow maze of streets of the souks leading from the square lends itself perfectly to ‘chase’ scenes by foot or motorbike. The options are endless for a filmmaker. Examples of films with scenes shot in this area include The Man Who Knew Too Much (1956) by Alfred Hitchcock which was based at the world-famous Mamounia Hotel; Hideous Kinky (1998), filmed in the souks with several scenes shot at a fondouk (traditional stopping place for merchants travelling Saharan trade routes); Sex and the City 2 (2010) contained scenes shot at Marrakech airport as well as in the souks and the Taj Palace hotel in the Palmeraie area of Marrakech.

We move away from Marrakech and head towards the high mountain pass, Tizi n’Tichka. 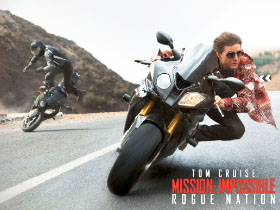 Eagle-eyed viewers of the more recent film, Mission Impossible 5 (2015), may recognise part of the route along the mountain pass which was used for the bike chase. Other parts of the chase scene were filmed near Tahanaout on the route to Asni.

Once up and over the mountain pass, we enter the town of Ouarzazate, renowned for its association with the film industry of Morocco. Based here are the Atlas Studios which opened their doors in 1983 and have since hosted film directors from many different countries, boasting the title of the world’s largest film studio, utilising over 20 hectares of land. Films shot here include The Jewel of the Nile (1985), The Mummy (1999), Lawrence of Arabia (1962), Gladiator (2000), Kingdom of Heaven (2005) and lots more besides. Frequently, some scenes of blockbuster films were shot here and other scenes made use of the stunning backdrop of the citadel of Aït Benhaddou, located just 30 km away from the city. 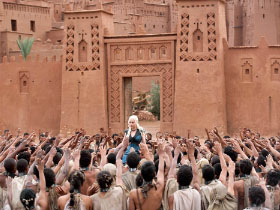 Aït Benhaddou is one of the best preserved ksars (fortified villages) in the world and as such was deemed a World Heritage Site by UNESCO in 1987. It comprises mud brick houses built closely together, some more ornate with motifs inscribed on castle-like turrets and some more modest dwellings, all interspersed by a maze of alleyways and surrounded by defence walls with towers. In fact, people still live here today. Within the village there is a Mosque, communal areas and cemeteries, as well as the fort which has panoramic views over the surrounding countryside. No wonder then that film directors have adopted this village as the setting for many films requiring fortresses, mediaeval-looking alleyways, edge-of-desert scenes and much more besides. Films shot here include Jesus of Nazareth (1977), The Living Daylights (1987), The Last Temptation of Christ (1988), The Sheltering Sky (1990), Kundun (1997), Gladiator (2000), Kingdom of Heaven (2005), Babel (2006), Prince of Persia (2010), Salmon Fishing in the Yemen (2011), and Queen of the Desert (2015). Scenes from the TV series The Game of Thrones (2011) were also filmed here. This list is not exhaustive.

And if you’re a real film buff, you may be tempted to veer off the route a little to see the remote village of Taguenzalt used by Gonzalez Iñárritu as the backdrop for the Morocco story in the 2006 film Babel. This remote traditional Berber village clings to the rocky hillside and serves brilliantly as the location for the accidental shooting of a tourist in a bus by two young brothers who have taken possession of their father’s hunting gun and are practising their skills. It can only end in tragedy.

Continuing on our route towards the desert, we arrive at the palm oasis of Agdz and the nearby village of Tamnougalt which boasts a hillside Kasbah, built in the 16th Century and used as a backdrop for scenes in films such as The Sheltering Sky (1990) and further scenes from Babel (see main photo). The stunning scenery of this area is synonymous with the requirements of film directors—vast palm groves, rocky outcrops and rich blue skies, not to mention friendly villagers only too willing to take part as extras—for a fee of course!

On the return route from your desert camp, if you choose to exit via Lac Iriqi, the vast dried-up salt lake once inhabited by millions of fish and other marine life, you will come across a petrol station on the side of the road that will make you look twice! On the route between Tazenakht and Ouarzazate lies the last remaining prop from the horror film The Hills have Eyes 2 (2007). It looks like it should be situated in the Midwest, complete with a swinging creaking signpost labelled ‘Gas Haven – Last Stop 200 miles’ and disused filling pumps, together with an invitation to stop for a beer! It’s a ‘must do’ photographic opportunity.

And here ends our circular route from Marrakech to Erg Chigaga and back again to Marrakech.

Although I have outlined above the major film-making regions we come across on the way, there have been many more films shot in and around Morocco due to its vast diversity of landscape. Indeed, it only takes a quick glance at the Internet Movie Database to see that the term Morocco, when entered into the search bar, delivers 1,197 entries as a film location! And that in itself speaks volumes about this stunningly beautiful country.