Elusive and Not-So-Elusive Creatures of the Desert 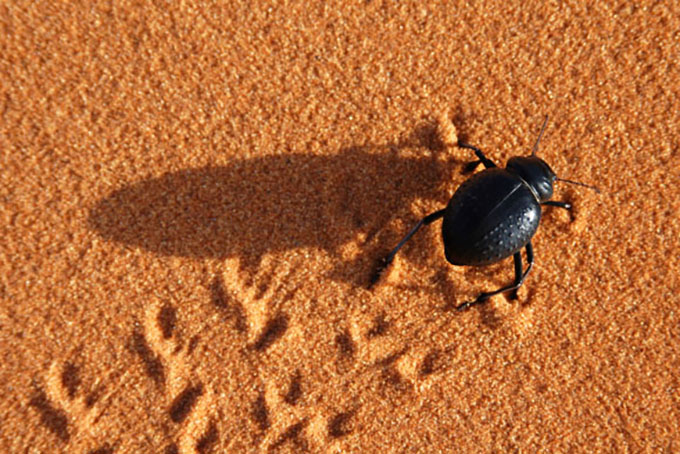 It was 6 a.m. when I woke up to the first rays of sunshine peeping through the tiny gaps of my tent. I stumbled out of bed, quickly dressed and ventured outside, pulling on my Tevas as I made my way towards the surrounding dunes of Erg Chigaga. Clambering to the top of the dune didn’t take long as the sand was beautifully cool beneath my feet and soon I was sitting on the ridge surveying the stunning scene before me of dune after dune reaching to the sky. Burying my toes in the sand, I became aware of tiny tracks on the surface of the sand, criss-crossing each other, then intermingling with what looked like small paw prints, then slither marks hidden amongst the more obvious camel hooves. So began my quest to identify the creators of these tracks. What creatures are these that prowl around me as I curl up asleep in my bed at night? How do they survive in this harsh environment? 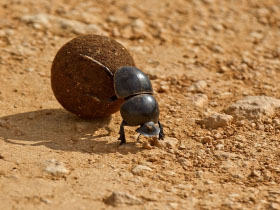 Perhaps the most frequently seen owner of the tracks is the Scarab or Dung Beetle (Scarabaeus sacer). They exist in huge numbers in the Sahara, surviving by creatively rolling the faeces of other animals into balls so as to feast when the need arises. Although this might seem a tad unsavoury, the Scarab performs a very important duty in the greater scheme of life in the desert as it breaks down the animal waste. As there is, generally speaking, so little rain in the desert, how else would the waste be dissolved into the sand? A clever little creature indeed! 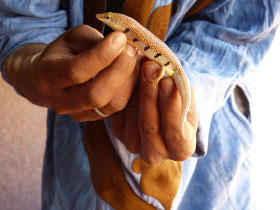 Fish in the desert? Well, many years ago, you may well have seen aquatic life here as much of the Sahara was actually under water…but that’s another story! The sandfish (aka Scincus scincus) referred to here is a species of skink that burrows deep into the sand and moves through it in a swimming motion. It can grow up to about 20 centimetres in length and has a long tapered body covered in scales with flattened feet. It has small beady eyes that can close and small nostrils, bodily adaptations that serve to keep the volume of sand out of its eyes, nose and lungs. When it feels threatened or when the weather is just too hot, the sandfish has developed the ability to dive deep into softer, cooler sand so as to maintain its body temperature. If you are staying at Erg Chigaga Desert Camp, just ask the boys to try and catch one for you to see, and I’m sure they’ll do their best.

P.S. It is worth noting that, although the fish may appear edible, it is in fact full of bones. One would really need to be starving to contemplate actually eating it! 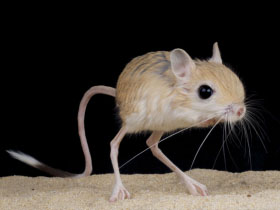 Imagine a rodent that is made up of the body parts of other animals – eyes of an owl, whiskers of a cat, the head and body of a mouse, the ability to hop on its long back legs like a tiny kangaroo – there you have it, the Jerboa (Jaculus orientalis and Jaculus jaculus). It is a small creature, up to 15 centimetres in length, not including its long rat-like tail which it uses to help balance itself when hopping around. Survival in the harsh desert temperatures involves staying in its burrow during the daytime and venturing out at night to feed on plants and insects. Its fine coat of fur is sandy in colour, thereby making it easier to hide from predators. It is said that it can hop up to 3 metres high when being chased and moves at 24km per hour! I never thought I’d say this, but this sounds like a rodent I might actually become fond of. 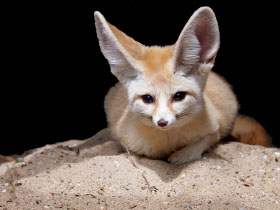 Now here’s a cutie I’d love to see when I open my tent flap! The Fennec Fox (Vulpes zerda for you Latin bods) grows up to 36-40 centimetres in length and can weigh up to 1.5kg. It has a thick fur coat which insulates it at night and also has thick fur on its paws to enable it to withstand the hot desert sand during the day. However, its most identifiable feature is its ears. They are exceptionally large, about 15 centimetres in length, totally out of proportion with the size of its body, and standing constantly erect. It is said they can even hear the sound of insects crawling across the sand and the Fennec often uses them to detect any prey that might have burrowed underground. Moisture is obtained from desert vegetation and their diet of small rodents and birds, although their kidneys have adapted to allow them to survive without water for long periods of time. Another endearing quality of the Fennec, should you need more, is that it apparently purrs like a cat when it’s happy. 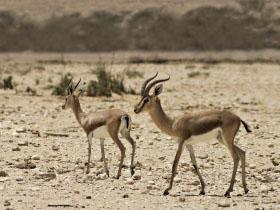 Although the above wildlife is the most likely to be seen in the immediate vicinity of the desert camp, there are many other creatures you might be fortunate enough to see whilst trekking in the desert. These include the Dorcas Gazelle (Gazella dorcas, the smallest gazelle in the world), golden jackals, desert rats, snakes, scorpions, spiders, lizards and antelopes. In fact, the town where the road ends and the desert begins, M’Hamid El Ghizlane (probably where your car was parked and you transferred to a 4x4 vehicle if you are reading this at Erg Chigaga Desert Camp), is the Arabic name which, when translated into English, means ‘The plain of gazelles’. And I haven’t even mentioned the ubiquitous camels or vibrant birdlife yet…