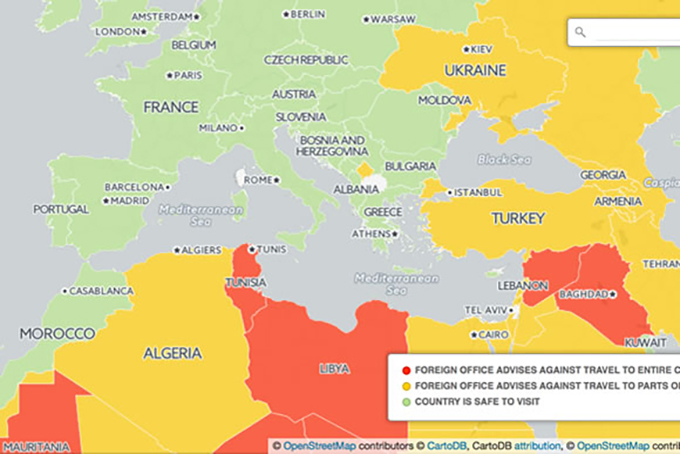 Following the horrendous atrocities in Paris and Mali, I have been asked regularly about the security situation in Morocco.

In my opinion Morocco is currently one of the safest countries in the world. They have a stable government, strong police and army, an incredible security apparatus (everyone knows everyone else’s business), and are completely intolerant of extremism. Moroccans readily accept other cultures and have a history of tolerance.

It is almost impossible for terrorist cells to operate in Morocco. Loners with an agenda could cause a problem, but terrorist cells, no. The government often runs the gauntlet from human rights groups, but they have no tolerance of any behaviour they regard as suspect. Moroccans with an IS agenda tend to operate from overseas. To operate in their own country is almost impossible.

As for the border with Algeria, this has been shut for decades. One of the guys that works at the camp is now employed by the army. He says the border is completely impenetrable. There is a huge army presence and surveillance system. No terrorist is going to risk going over the border–the chance of getting over is virtually nil. They are going to choose softer targets. The border is probably the last place they will decide to go—it is about as safe as it gets.

Morocco has been a sole star in North Africa for some time. It is used to handling security problems, has strong systems and I think it is safer than its European neighbours. I have been saying this for some time, and nothing has happened to alter my view at all.

The atrocity in Paris was awful, committed by a bunch of thugs that represent nothing more than a death cult. However the media make a bad situation appear even worse. We are bombarded with information. And this just magnifies the awfulness of the situation. Atrocities have been happening for decades, centuries, but now everything is under so much media spotlight.

And then we read and see from the US the terrible shoot outs that appear to be increasingly in regularity. But I don’t believe for one minute that, as a tourist, it is unsafe to visit the US.

What really does annoy me is that the US State Department’s version of crime in Morocco is so far from the truth that it really does make me sceptical about any guidance that is provided by government departments. Morocco is one of the safest countries in the world. There is virtually no gun or knife crime, murders are virtually unheard off. Yes, there is some petty crime. But let’s just say, when I change US dollars and foreign currency at the money broker, I walk into his unlocked office (surrounded by piles of money) and then I walk out with a rucksack of cash. Cash is still king in Morocco, but no one walks around in fear that they are going to be mugged.

I would go as far to say that Morocco should be held as an example of how societies should operate in this modern world. Tolerant, but intolerant of any criminal and suspicious activity. They respect human rights but have no time for those that they suspect are a danger to society.

Statistically the chances of anything happening in Morocco are infinitesimally small. I don’t wish to make light of the atrocities, but being involved in any terrorist activity is far less likely to happen than being involved in an air disaster as a result of mechanical or pilot error, or driving to work every day. Unfortunately the media have helped drive this absurd climate of fear, and we all get sucked into it. But it’s no longer news, its entertainment. It is frankly a disservice to all those who have been personally affected by the atrocities. There is no sense of perspective, and seeing the atrocities unfold in Paris was akin to watching a soap opera on TV. It´s quite disgusting really how prime time news is really a form of entertainment, rather than information. Every media organisation is falling over each other to bring the latest breaking news first.

And the US State Department does not help either. This blanket Worldwide Travel Alert is of no help to anyone. It is a major case of covering your backside, saying ‘we warned you so.’ All it does is spread yet another layer of fear into the US public, where no fear should exist. So, is one supposed to live in fear on a sledge in Greenland? Are you and your dog going to be followed by a load of gun-toting IS sympathisers?

Let me attempt to reassure you:

Really, if one is going to choose ONE country to travel in, Morocco would have to be near the top of the list in terms of security and safety.

So, what do our clients say? I often hear tales from clients of the camp about their friends and family thinking they are mad to travel—and then they return home to hopefully spread the news that the situation in Morocco is totally different to mainstream opinion. When people visit Morocco and the camp, especially from the US, they are amazed at how safe, tolerant, kind and accepting the people are. There is no anti-American feeling whatsoever. One client said that they feel a lot safer in Morocco than they do in New York! That kind of sentiment and feeling is the prevalent opinion of all our guests.

Last year we had a client who cancelled because they were attending a medical conference in Marrakech that was moved to Paris due to security fears. At the time I said it was a daft decision—Paris is a far greater risk than Morocco. They scoffed at my reasoning. They said that security in Paris must be better than Morocco—it’s the First World after all. I said that in Morocco everyone knows everyone else’s business, whilst in France they don’t.

Terrorism has been around since I have been alive—the IRA, Red Brigade, the Baader-Meinhof gang, and then the 9/11 bombings, etc. etc. It’s going to be around until the time I die too. There is no perfect time to travel. We never know what might happen. The media make us believe that this time is different from the other times. Really????

And lastly, I went to Mexico with the family last July, against many people’s better judgement. All one hears on the news is stuff about drug trafficking, gangs, murders and shoot-outs. They undoubtedly occur, but the Mexico I saw (and we did a lot of miles) appeared safe, relaxed, accepting and crime free. Totally different to the image portrayed in the media. If my opinions were based on the media I would never have gone, but luckily I am widely travelled and know better than to trust the diatribe they portray.

I hope those of you reading this message find it reassuring. I am sorry if I get carried away–but the truth is that Morocco is safe, especially compared to its European, US and North African neighbours. I can’t give you any guarantees—and I know you don’t expect them either—but I put my hand on my heart and I promise that Morocco has no anti-American or anti-European feeling, feels safe and from what I can judge, is safe.