Here at our luxury desert camp in Morocco we aim to give you an insight into aspects of Berber life and culture that may be of interest to our readers. In this article, Kathy gives an overview on some of the adornment commonly worn in days gone by.

In Morocco, most of the gold and silverwork that was carried out in ancient times in the production of jewellery was crafted by Jewish silversmiths. The artisans took refuge in Morocco after the Reconquista in Spain in 1492 and brought with them their skills in jewellery-making, using their own customs and traditions to build a trade which has served to enhance the reputation of Moroccan jewellery. Whilst urban jewellery was predominantly made of gold, rural jewellery was always made of silver, and was almost exclusively crafted by men who succeeded their father in the profession from generation to generation. Techniques used included enamelling, engraving, filigree, niello and relief work, as well as the attachment of semi-precious stones such as amber, carnelian, coral and turquoise. Beads, which were once used as currency for trading purposes, were also frequently attached to necklaces, adding to their beauty and value. Old silver coins also added value to the piece.

The wearing of jewellery in Morocco in the past was much more than just an added beautiful feature to an outfit as has been the case in the West; rather, it bore testimony to the identity of the wearer, communicating social status, wealth, tribal identity, religious beliefs and matrimonial status. The wearer who made her own assemblage, creatively adding stones, beads and amulets to the silverwork, made a powerful statement about the essence of who she was. Often, to the Western eye, these items of crafted jewellery nowadays appear ‘primitive’…but in fact this form of embellishment and adornment was highly-developed and provided insight into the uniqueness of the individual who integrated her appearance with her sense of self. She would wear necklaces, earrings, headbands, bracelets, cloak fasteners, hair decorations and amulets, each element combining with the others to reveal her unique identity.

5 interesting items of adornment from yesteryear 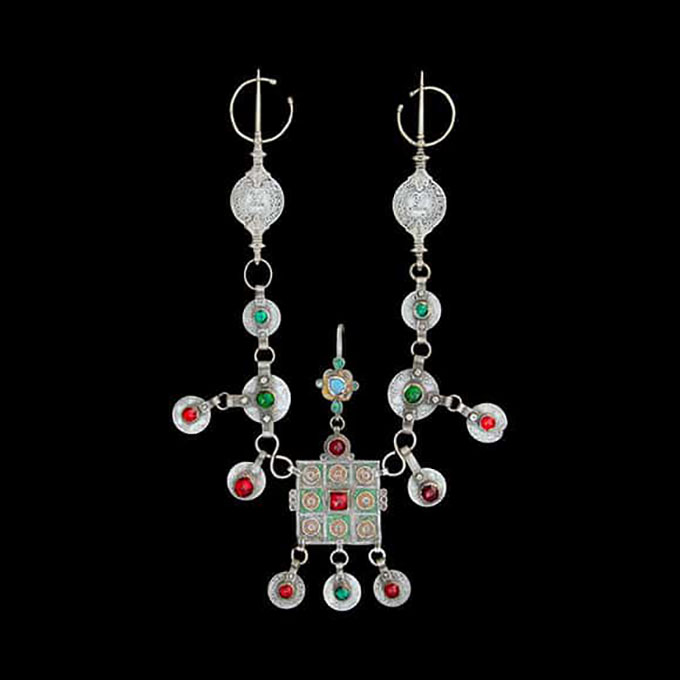 A Fibula is an item of jewellery that was commonly worn by women as an everyday adornment whilst going about daily work as well as on special occasions. It is essentially a cloak fastener, comprising an ornate metal triangular, round or oval shape with detailed etchings in filigree or enamel, and a pin which serves to fasten two layers of material together. They were usually worn as a pair. Tribal women often wore (and sometimes still do) a simple piece of material or two pieces of material draped across their bodies and tied with a belt. The fibula negated the need to cut the material or to sew it; the clothing could simply be fastened by the use of the pin or pins to attach the material together. At the same time, the fibula served as a decorative item. If it was made in an inverted triangular shape, this represented the female form and fertility. Often attached to the fibula by means of a chain was a tagemout (egg-shaped pendant) or a fakrune (turtle) or an amulet such as a hirz [see below] and also a number of silver coins. The weight, size, detail and workmanship of the fibula worn indicated the social standing of the wearer. Each region or tribe in Morocco had its own distinctive style of fibula, but each pair was unique. 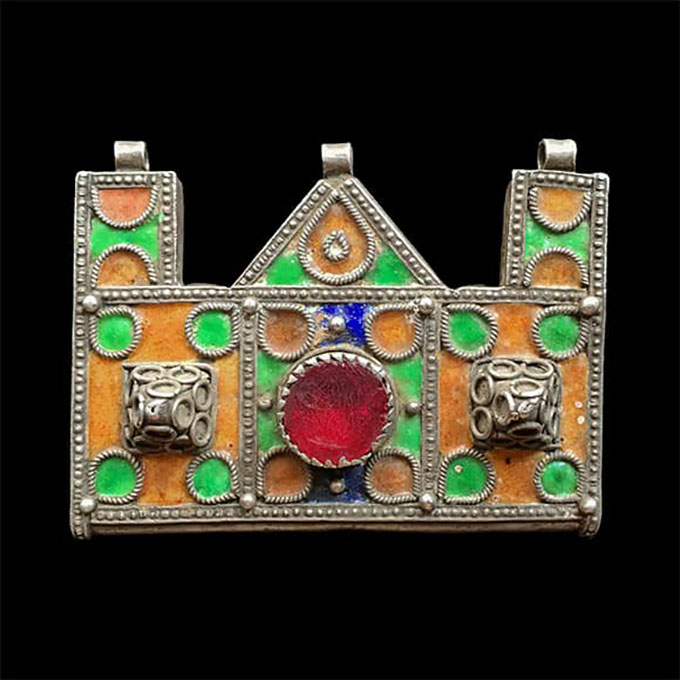 The supernatural played a very large role in the life of the Berber people of Morocco – and still does today. It was not enough to just wear jewellery for adornment, rather an amulet was often attached as a symbol of protection against any evil forces which might try to influence or bring illness to the wearer. The amulet was inextricably linked to the religious beliefs of the people and to their culture. Often, the amulet could be opened and inside would be stored tiny documents citing the Qur’an. One popular type of amulet is the hirz (Arabic for amulet). These box-type amulets were often worn by Jewish women in the Anti-Atlas as the centrepiece of their fibula. They were usually very ornate, decorated with green and yellow enamel, representing nature/life and sunshine, and containing within sacred texts or substances to protect the wearer and ward off all perceived supernatural forces, danger or disease. 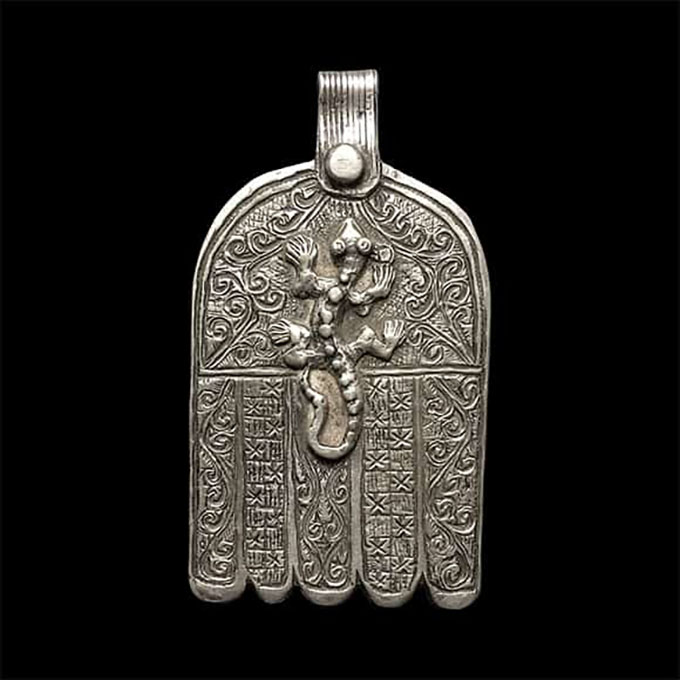 Although technically another type of amulet, the khamsa is a unique item that is often worn as a pendant or larger versions are used in house decoration. Since pre-Islamic times, Jews, Carthaginians and Romans all saw the khamsa as having the power to avert evil. However, Islam adopted the symbol and gave it the name ‘Hand of Fatima’ in honour of the prophet’s daughter. The word khamsa means ‘five’ in the Arabic language and the symbol of the open hand with its five fingers is said to represent the five pillars of Islam: profession of faith, obligatory prayer, almsgiving, fasting during Ramadan and pilgrimage to Mecca. The Jews saw the symbol as a reminder to all to praise God with all 5 senses. Wearing this symbol as jewellery has increased in popularity through time, even being seen worn recently by Western popstars such as Beyonce, albeit in a more dainty and modern form. In rural Morocco the khamsa was usually made of solid silver with added filigree and enamel work, often also bearing motifs such as flowers, animals, scorpions, birds, daggers or ‘the evil eye’, each symbol reinforcing the power of protection of the amulet. 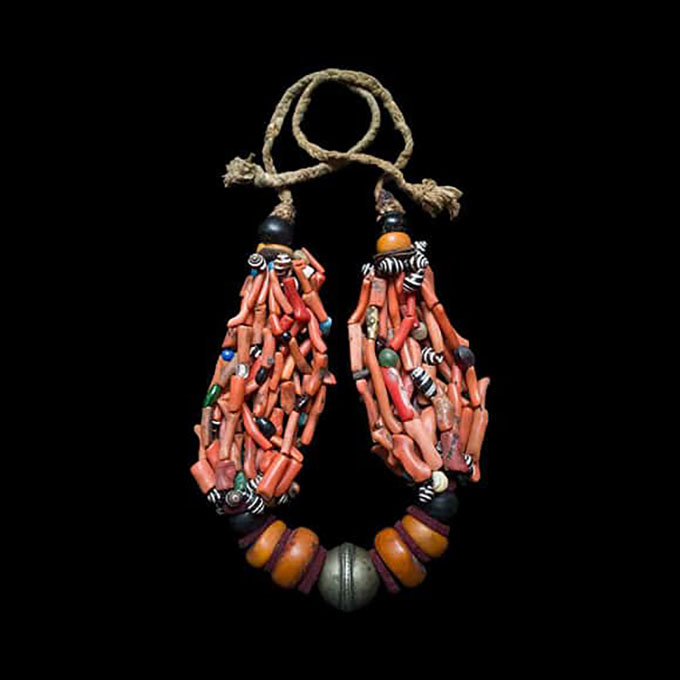 Necklaces have always been one of the most popular forms of adornment in Morocco. Vintage pieces often have coral, genuine amber, shells and beads. At the centre of the necklace one will often find amulets (hirz and boghdad - similar to a cross) or silver tagemout which are egg-shaped beads, sometimes decorated with filigree and enamel. 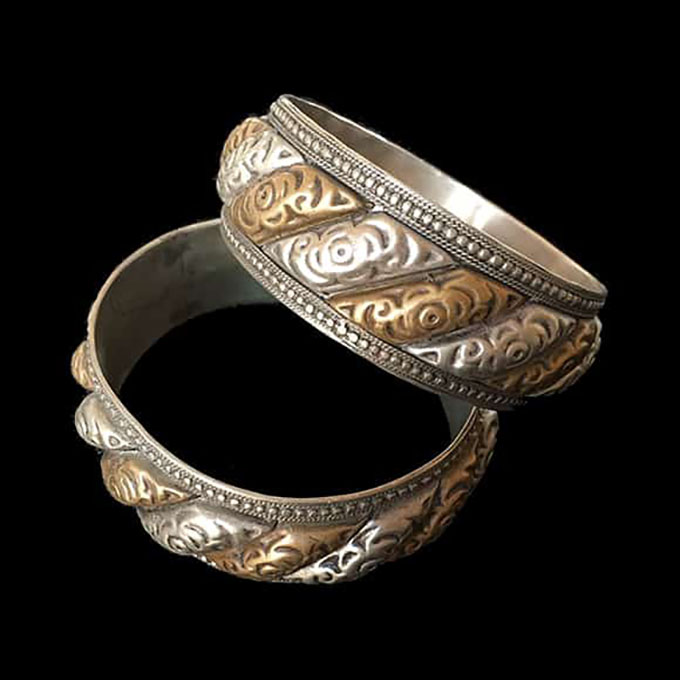 Silver bracelets were, and still are, produced in great quantities and in varying styles in Morocco. One of the most interesting styles of bracelet is that once worn by women of the Ait Atta tribe. These were characterised by their heavy weight (sometimes up to a kilo per pair) and the spikes (as many as twelve of them!) surrounding the bangle itself. They were sometimes worn as an item of self-defence, an early form of knuckle-duster one might say. Another popular style of bracelet, still worn today, are the shams wa qamar or sun and moon bracelets. These consist of alternate bands of gold and silver on a bangle, the silver being embellished with beautiful coloured enamel.

Whereas in the past, the above items of jewellery would have been handcrafted by artisans, in the modern world this method of creativity is still alive but less frequently to be found. Tiznit remains the jewellery-producing capital of Morocco, its origins as such being due to the immigration of Jews to this area in the early 1500s and the subsequent passing on of the tradition within families. This is one of the few places in Morocco where genuine handcrafted silver is still to be found. Now, however, sadly much of the silver jewellery produced elsewhere is imported from the Orient as this is a cheaper and less arduous means of earning money through business.

The above vintage specialist items are now being preserved by museums and private collectors as well as being found in specialist galleries throughout the world. However, a large slice of antiquity is being retained so as to preserve the cultural and religious symbolism associated with these items so that future generations in Morocco can gain an insight into the way of life of their ancestors. 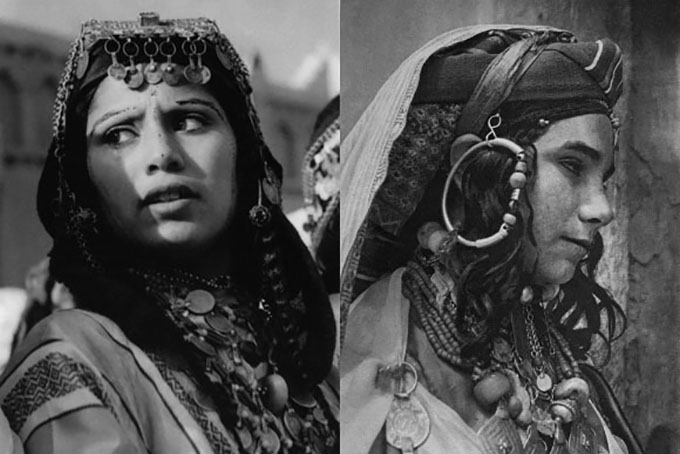