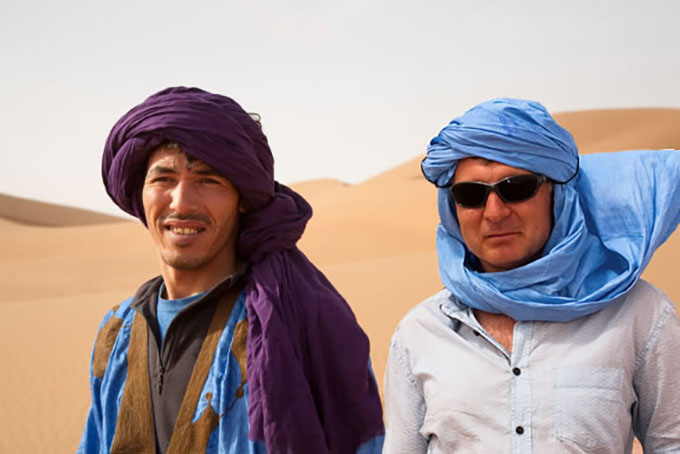 Feeling inspired today so thought I’d write the first post to my blog. It’s been a long time coming.

It’s difficult to know where to start. There is so much to say. A sensible starting point is to explain who we are.

I am Nick – the chap throwing his daughter in the air in the pic below (also the ugly mug top right!). I am the one who has invested in the project and responsible for the design of the camp. Now that the camp is up an running, I do the marketing, reservations and nasty administrative stuff. I spend half my time in Spain with my wife diane and two daughters, Giorgina and Isabella, and the other half in Morocco. I don´t want to bore you with my CV, but some people ask and are interested. My background is hospitality and hotels. I spent longer than I should have had working at Four Seasons and Mandarin Oriental Hotel Group in the Far East. I then left my job, met Diane my wife , and we ended up purchasing the Cape Heritage Hotel in Cape Town, a beautiful and historic property in the city centre. It was with much sorrow that we sold the business in 2007. After going around the world thinking where to go next – and after Cape Town I found it very difficult to find anything comparable, let alone better, we ended up in Marrakech. The idea of a desert camp was borne, but that’s for another blog. 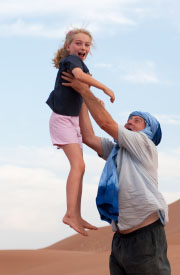 My business partner is Mohamad Boulfrifri, who goes by the name of Bobo. He is a true berber, as you can tell from the main picture. Bobo lived the first 20 years of his life in the desert. His family managed to grow some crops and keep goats, but with the damming of the Draa River in Ouarzazate, and the drying up of the Draa River which runs through the desert, this particular lifestyle became unsustainable. So, Bobo moved to M´hamid (where the tar road ends) and started working in various tourism ventures. He then setup his own successful trekking business and is now my partner at the camp. How we met is for another time, suffice to say here that he runs the camp with his team of friendly Berbers. Bobo is extremely charismatic, speaks 6 languages and is your ideal host. He knows what to do in the event of a sandstorm, he can navigate around the desert where mere mortals would get completely lost, has embraced the concept of luxury.